2014 was a good year for me. On a personal level, my family added a generation when O arrived. Born in April 2014, he was the youngest guest at my launch. I had just referred to him in my launch speech and he’d disappeared and suddenly just materialised again, right on cue, along with his parents. Show immediately stolen 🙂

(I have not included the photo but just imagine everyone spontaneously going “Awwwww” when he entered the room.)

On a writing level – well, what can I say? There were two highlights of the year. The first was getting a book edited, I mean really edited, by a dedicated professional. It’s one of the reasons why I would always say, try to get traditionally published no matter what. Working with Liz Hudson was an absolute pleasure, in the way walking up a steep hill and then looking at the fabulous view at the top is, high on the rarefied air and the exertion after a good climb 🙂

The second and biggest highlight was birthing the book! I suspect I will never experience a high like it again. I have always wanted to have a book written and published and now that lifelong need has been met. That changes my internal reality quite dramatically. For having the faith and belief in White Feathers, I am of course indebted to my publishers O’Brien Press, who put so much into the creation of a beautifully produced first edition, and who have been battling a drastic Arts Council cut for 2015.

I would like for O’Brien Press to thrive, and from a selfish point of view publish more of my books, and I believe there are readers out there who would like more of my work too, so hopefully a more equitable solution will be found. (Not to mention that they publish other stuff too, and really good quality, just looking for great stories that readers will care about.) That this deduction appears to be solely aimed at O’Brien Press seems to be very pointed, and that’s all I’ll say…

The aftermath of the book’s release and trying to sell it has been both a highlight and a lowlight. The lowlight being that there remains in some highly rarefied critical circles a noli-me-tangere attitude towards romance and dramatic stories, no matter what genre they’re in or how well they’re written, and given that my novel is dramatic and romance-driven, well…it’s as Lily Allen says. But I’ve no intention of apologising for either 🙂 and on the plus side the support of the booksellers for the Christmas catalogue (thank you Dubray and Easons) has been very cheering indeed. As for 2015, I will keep inviting myself to the panels and conventions where writers are featured. I would very much like to be invited to speak at them and any conference organiser who would like me to join in a panel is warmly encouraged to click the “contact me” link.

The highlight of 2014 was a result of the lowlight. I found solidarity and pleasure in connecting with actual readers, who want a story they can really get lost in, a story with “three dimensional characters” who they “can’t stop thinking about”. I’ve been really touched and cheered by the support I’ve received from the book blogging community and on Twitter and latterly Facebook, as well as the encouraging reviews I’ve received. I’ve visited bookshops all over Ireland and plan to visit even more in the early part of this year. I’m off to Donegal in late February to meet the North West Writers group and have already been to Schull, Drogheda, and even bookshops in England to sign the solitary copy in Waterstones York and Leeds, as well as sweet talking the White Rose Bookshop in Thirsk to order in some more. But the best moment had to be my visit to Brighton and Eastbourne, where I had a BBC interview and met Sheila Bugler and Annemarie Field, who published a lovely article in the Eastbourne Herald, which I hope to to be able to post shortly, because it’s about White Feathers and it’s rather special 🙂

I expect to be very busy with promotional work for the next while as social media assists me with meeting interesting people and spreading the good word, but there is also the question of writing. I have two works in progress, one parked for the moment, or at the very least with the handbrake on, the other I’m working away at with gusto.  I also plan to ask the lovely authors I’ve gotten to know throughout the maelstrom of 2014 if they would like me to interview and feature them here, so if anyone fancies a slot, let me know. And there will be more essays, oh yes…

Thanks to all in O’Brien Press – you’ve been fantastic. Thanks to my agent Svetlana, PR sentinels Grainne Killeen and Fiona Brownlee, and all the authors I’ve met and all the readers who have enjoyed White Feathers and wanted more. I’m optimistic for 2015 and I’m going to keep the faith. Happy New Year to all of you. 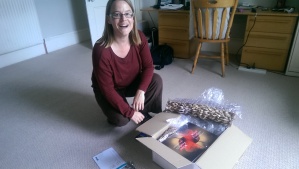