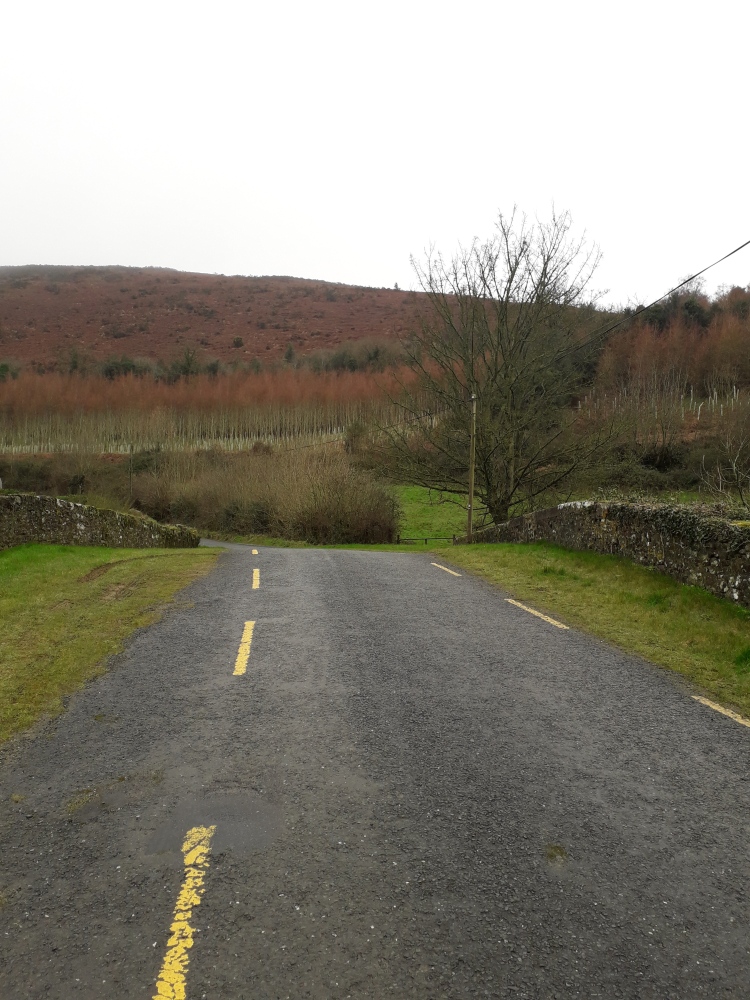 Continuing on my quest to promote climate-friendly, local travel – here comes the next phase of my cross-Ireland walk, the European route E8. This was an overnighter, since the path crossed through 50-55 kilometres of land that is not well-served by public transport. I was accompanied by my valiant friend O, who provided moral support during our frequent experiences of getting lost and encountering dogs in their driveways.

This part of the walk is not as well-known as some of the coastal tracks, but we experienced some heart-stopping beauty on the way. We also experienced copious illegal dumping,  dogs barking and running out on the road, and some really terrible way-marking. I loved this trail, and it’s worth doing, but I would not do it alone.

We started by once again taking the train, meeting at Limerick Junction to catch the 9.42 train to Clonmel. At twenty-five to eleven, we got out at Clonmel station and made our way into town. On my last journey I had passed a place called The Junction Cafe, so I suggested we try there. It was busy that Saturday morning – a good sign – and our vegetarian breakfasts were delicious. (They have meat options too, but I didn’t want to eat anything too heavy before a day of continual exercise)

Fed and watered, we hit the road. And our first snag: I had planned to pick up some sandwiches at a deli in a Spar or Centra (for non-Irish readers, these are chains of small grocery stores you often find in a town or village) but in Clonmel there was none to be found! Anywhere! Had to buy bags of sweets in Easons. We did eventually find a Centra but it was far over the other bank of the river Suir, in a small village that felt separate from the main town, even though it did not have any particular sign. We passed a pub called “The Emigrant’s Rest” and following the signposts and our heavily-marked map, headed up the hill. It was a steep hike up towards the cross that dominates the town. The views of Clonmel and the mountains to the east were wonderful, though. 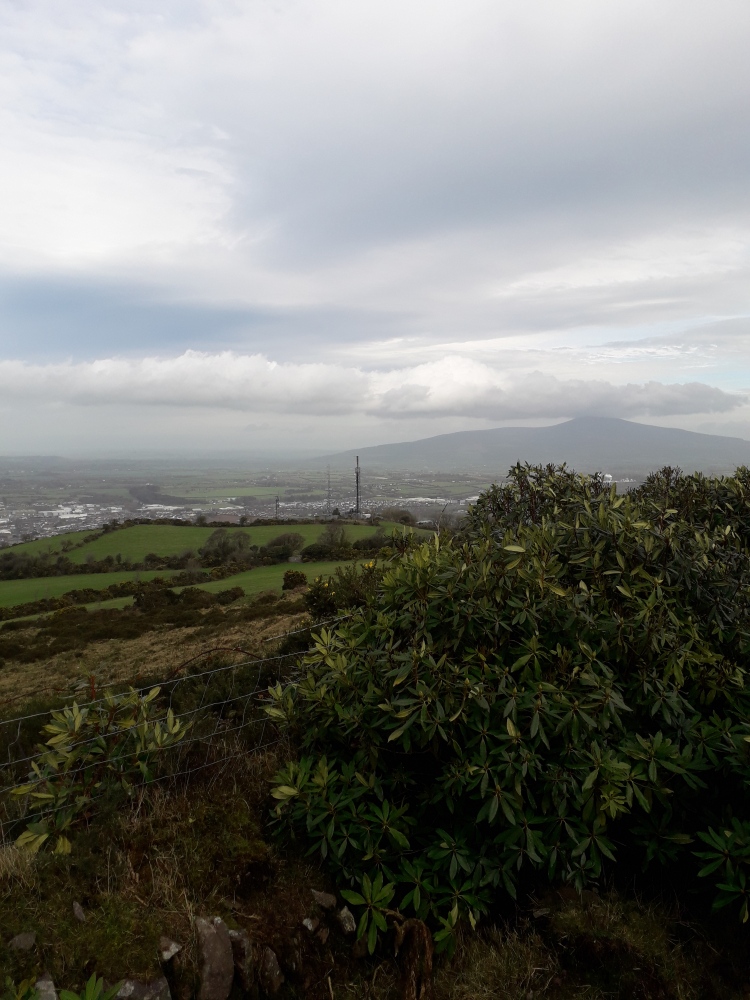 After the cross, we lost our waymarking and wandered around the mountains, occasionally meeting the little man on a way post, but the directions it pointed us in made no sense in comparison with the map, pointing east instead of south-west, and we went round in circles. We were supposed to exit the mountain into a forest; what we ended up doing was taking a ramshackle short-cut through the forest through birch and pine plantations and emerging onto a field, exiting onto the road via a gate we had to climb over. We walked about a mile up the road and then found the road back into the forest – but a note informed us that the Department of Defence were staging military manoeuvres and we couldn’t go in. I didn’t hear a scooby, but nevertheless we kept on via the road, which meant that we passed a lot of driveways where dogs growled and even ran out at us. This is the part of the track that, in spite of the wonderful views, I couldn’t recommend walking alone. I was glad of the presence of my companion!

On the plus side, the weather was excellent, defying the predictions of Google which had warned of rain.

After an intensely frustrating if beautiful number of hours, we found a mountain road that reminded me of the Military Road in Laragh as it passed through the mountain gap. The sun was beginning to set and the whole area was bathed in bright light. We were working with the map at this stage as we had lost the way marking, but rejoined the path somewhere in a region called Sillaheens. From then on we descended into the Nire Valley and this was sublime.

We limped across a main road and down to the hamlet of Fourmilewater, beyond which we found our guesthouse, excellently signposted. Although we did get a bit of questioning from the host straightaway about the third person of our party not coming – since we had booked for three – which irked me a bit, the food for dinner that night was divine – really delicious – and the rooms clean, modern and very comfortable and the hostess helpful. I would absolutely recommend it for dinner, breakfast and accommodation. And that night was the highlight of the journey – after dinner and a bottle of Shiraz, we made our way to the small pub, Lonergan’s, across the small river. And as I looked up, I saw the loveliest canopy of stars, big and small, the constellations sharp and clear, no sodium streetlights or city light pollution ruining the ink-black sky. I spent most of the short stroll looking up at the Milky Way in profound wonder. That night provided me with something I had not felt in a while – awe. Not an emotion often promoted in this cynical age.

I also note that the 12 o’clock Angelus rang for us on our way out from Clonmel, and the church bells at the small Fourmilewater church struck six when we arrived.

The following day we left at 10am and hit the trail straightaway. The morning was foggy and the path wandered west along the uplands of the Comeraghs through bog roads and forest paths. The weather cleared and the paths were pleasant, though it took us seven hours to walk 28 kilometres into Clogheen. The views of the Vee were fantastic, though the tranquility of the forest paths were marred by scramblers, males on motorcycles who ripped through the paths and streams. One of the highlights was passing a mysterious round tower monument, whose surrounding turrets were headed by stone dogs. As if I hadn’t seen enough canines. Turned out to be a monument to an anti-Treaty gunman and IRA leader who was an active agitator during the Irish Civil War, and was killed close to the area in 1923. 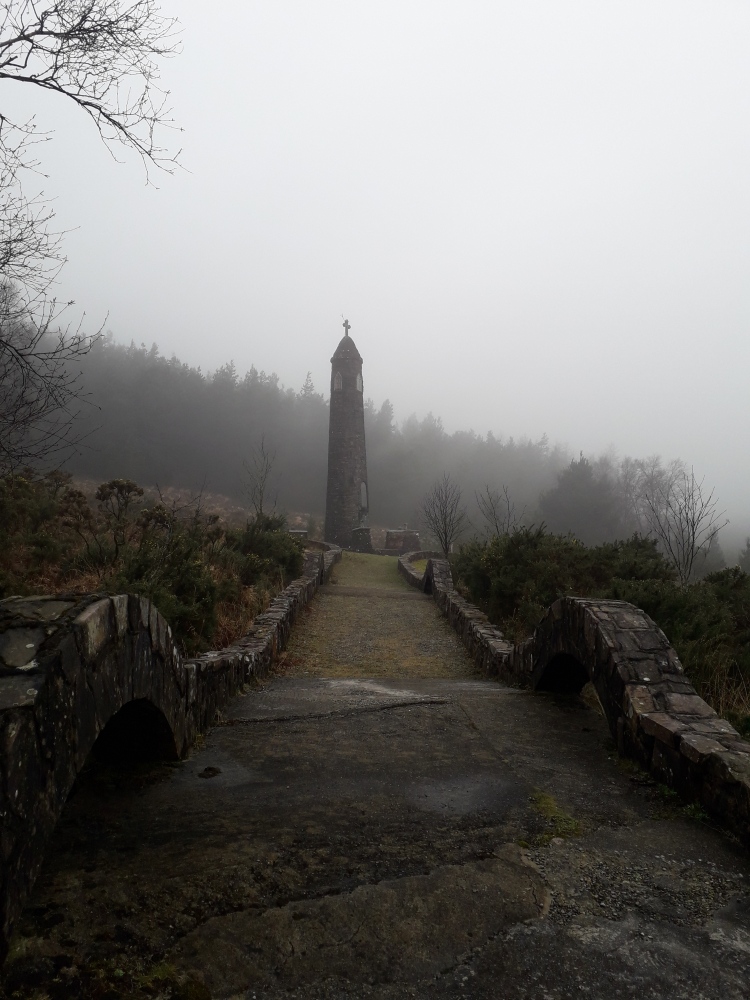 At Clogheen we barely made the 5.15 bus to Fermoy and Cork – if it weren’t on Irish time, we would certainly have missed it! That was a stroke of good luck and nice ending to our completion of the East Munster Way. Next instalment will be the start of the Avondhu-Blackwater path. I would recommend this part of the trail, with reservations about the terrible way-marking out of Clonmel, and the presence of dogs and illegal dumping. And scramblers. But also stars at night.